A customer came to see me at a show a few years ago and told me about a set of shoe lasts she'd inherited from her late father.  She was interested in having them painted up in canalware style, and could she bring them to me to see if they could be done and give her a quote for doing them.  We arranged a date and time and she duly arrived with a bag full of shoe lasts and accessories. Previously I had only seen the one-piece shoe lasts so seeing a set that were made in different sizes for different sized shoes was quite fascinating to me. 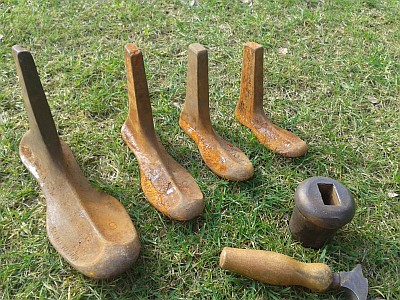 The metal on the the pieces was somewhat rusty, so quite a bit of cleaning up and preparation had to be done to get them to a condition were the paint would key and not be affected by underlying rust. Once I was happy with the metal I coated the lasts with an anti-rust preparation, followed by an oil based undercoat, and finally two enamel topcoats. 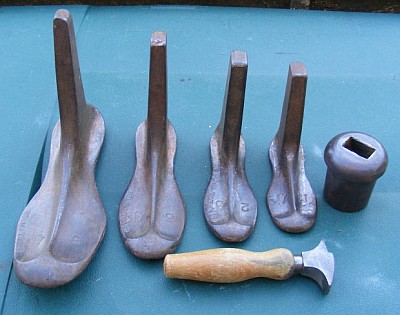 Once the base was ready to decorate I was able to plan out where the roses would go. I'd also found that under the rust was the name of the last's maker and the size of foot each was meant for.  In addition to the lasts there was also a wee hammer-type device and a small weight-shaped object with a hole in -  I didn't have a clue what that would be for but it was painted up as well. 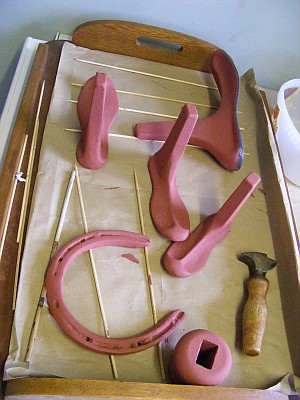 Once everything was painted and the lettering picked out in a contrasting colour I varnished each piece to protect it.  Then I turned detective and went to find out about the maker of the lasts. By the time my customer came to collect them I had managed to find the details of who had made them and when, and was able to supply a copy of the information to the customer. 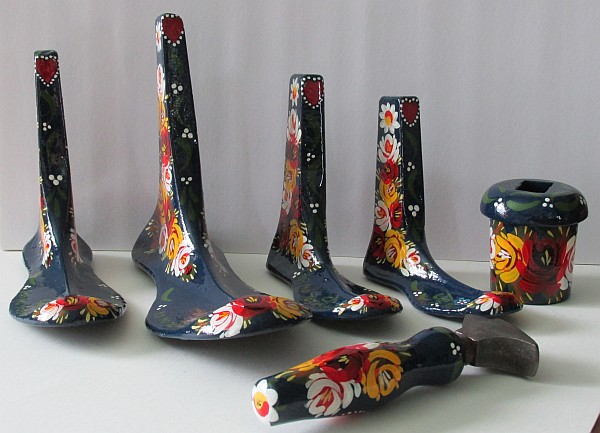 The customer was thrilled with the end result and asked me to paint a set of scales for her afterwards.