Background to the Art

This art form stems from the type of decoration used on the brightly painted canal narrow boats of the Midlands canals in the 19th century. The usual elements are what are known as "roses & castles", although the actual designs include not only roses but also daisies and small blue forget-me-nots, as well as some of the regional variations arising from different cargoes carried on the boats. On some vessels ears of corn were included, showing that this was a valuable part of their carrying cargo. 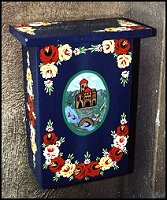 The castle scenes normally depict a rather romanticised landscape, which includes distant hills, a lake, a river crossed by a bridge, as well as the castle itself - which were of varying architectural styles, depending on whom the artist was.

Both the flowers and the landscapes were highly stylised, and painted with a minimum of brush-strokes to achieve the desired effect.

Much of the painting was done by craftsmen employed in the boatyards, although some of the owner-boatmen (known as number one's) did their own painting and sign-writing.

Left: Castle panel on my mailbox. 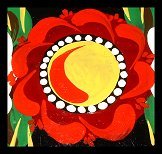 Not only was the exterior of the narrow boat painted in this fashion, but inside the cabin where the boatman and his family lived every available surface was decorated with roses and castles designs, with the added attraction of brass door knobs and stove rails, crocheted curtain edgings and pierced-edge lace plates adorning the cabin walls, to make a small, cramped living area into a visually pleasing one.
Narrow boat art has survived despite the loss of the trading boats on most canals, and is now finding new roles decorating modern pleasure boats as well as objects for use or display in the home.

Right: Detail of anemone from one of my designs